Meet at the Archway
Please bring secateurs, gloves, and a bucket for prunings which are to be put in the skip on site.
Loppers and pruning saws also welcome if you have them.
Expert advice on pruning of hybrid tea roses and climbing roses.
(Please note there will be no alternate date if it rains). 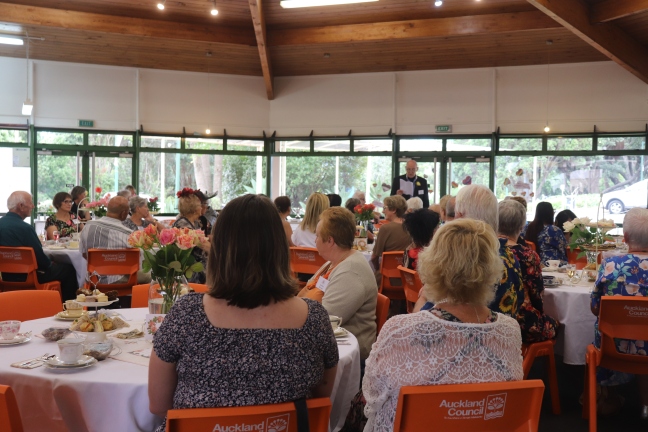 The Auckland Rose Society celebrated its 75th Anniversary on Saturday 27th February. A Vintage High Tea was served for guests and members at the Auckland Horticultural Council venue at 956 Great North Road. A huge vote of thanks to the organising committee and friends. The Anniversary Cake was cut by our Patron and our newest member. Thanks also to Kings Plant Barn, Yates and Kiwi Gardener magazine for their ongoing support of the Auckland Rose Society.

We are all looking forward to catching up with you and sharing the love of roses.

As a result of increased Covid-19 alert the Auckland Rose Society will cancel/postpone all future meetings until further notice.

We will keep in touch via our Web page, Facebook, and for members through the magazine and emails.

Auckland Rose Society Committee has a busy and eventful 2020 planned for our Members. Garden visits, Monthly Meetings, Pruning Demonstrations, our Annual Show and 75th Anniversary celebrations are just a few of the events already planned. We look forward to meeting up with you all again this year, Happy Gardening!

All welcome! Come and see the best Roses in Auckland, exhibited by Rose Society members during our major event of the year, at the beautiful historic Selwyn Library.

ARS members who are exhibiting – please see the show schedule for staging times.

Auckland Rose Society held a number of pruning demonstrations over June and July which were well attended. A big thank you to Parnell Rose Gardens and Kings Plant Barn for enabling us to share our knowledge of the care of roses. The Auckland Rose Society also wishes to extend a warm welcome to all our new members who have recently joined, and we hope to see you at our monthly meetings and special events over the coming year.

As one of Auckland’s leading Consulting Rosarian’s, Max wrote the cultural notes for the Auckland Rose Society Magazine for more than 25 years and also currently supplies Cultural Notes to the Franklin District Rose Society for use in the Franklin magazine as well. We have lost count of the pruning, grafting and rose culture presentations Max has performed over the last couple of decades, both for Auckland members as well as for the public, and he is always happy to help new people with their rose questions, offer advice and simply visit gardens to help out with any rose problems they may have. Each year he has helped to prune members’ roses and prune for members of the public. Many a donation has been received by the Society on the back of his annual endeavours over the last few decades.

An avid Exhibitor Max has won multiple show awards over the years and has been a regular on the Champions bench at the Auckland Show, as well as exhibiting and winning awards at the Franklin show every now and then whilst enjoying the short trip south. Max has always been there to help with the Auckland Show set-up, Stewarding, and the taking down of the Show and will also help to man the gazebo for us at the Auckland Festival of Roses at the Parnell Rose Gardens this year.

His garden is known for its two-storey high Papa Meilland and 3+ metre wide Berolina and he still maintains around 100 roses on his 880sqm section in Mt Wellington. Max has also been responsible for the Metlifecare Highland Park rose gardens for the last decade, helping to maintain hundreds of roses there in his day to day role as a gardener for the village.

We have no hesitation in nominating Max for the Frank Penn Award and feel it would be fitting recognition for his tireless efforts in supporting the Society and promoting the Rose.

Meet at the archway